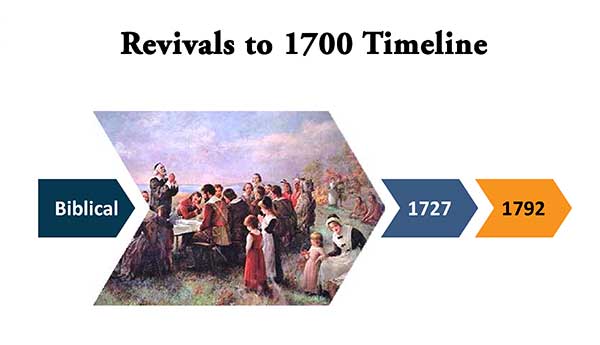 The most well-known revivals have occurred in the past three hundred years, since the first Great Awakening with Jonathan Edwards, George Whitefield and the Wesleys.

But it should not be assumed that there were no significant moves of God up to the seventeenth century.

In the first few centuries of her existence the church encountered brutal persecution, making any historic documents virtually impossible to create or store. Their possession would have been illegal and dangerous.

Also, as the church was freed from persecution after Constantine, the church’s status quo became formalised and ritualistic, generally opposing any signs of reform or spiritual awakening. Most materials we have about such movements were written by their opponents, because the mainline Church usually destroyed any writings of the reformative or revivalistic groups.

Nevertheless, despite the fragmentary nature of the evidence of revivals or spiritual awakenings, we have sufficient information to piece together a fairly accurate overview of their effects.

c.175-c 195 Lyons, southern Gaul under Irenaeus, evangelistic success, exorcisms, healings, gifts of the Spirit evidenced, some raised from the dead.

c.200-249 Thousands flocked into churches throughout the Roman Empire.

c.240-332 Armenia under Gregory the Illuminator saw a spiritual awakening.

c.150 For at least a century Montanus’ ‘Montanism’ or ‘the New Prophecy,’ flourished in Phrygia with a renewed emphasis on spiritual gifts, especially prophecy. Tertullian of Carthage was attracted to the movement c.207 becoming its chief and most notable supporter.

c.270 Anthony, one of the pioneers of the monastic movement, led a vibrant spiritual movement and performed many miracles, healings, exorcisms.

c.361 Martin of Tours, bishop and a missionary, was also a pioneer of monasticism and led a spiritual movement which brought multitudes to living faith. He had many miracles attributed to him.  Septimius Severus, Martin’s biographer, mentions his powers of exorcism, prophecy and healing as decisive factors in his success in winning large numbers of pagans.

c.328 Simeon the pillar ascetic (also called Simeon Stylites or Symeon the Stylite) attracted crowds of pilgrims who renounced their former religion, destroyed their idols, and were baptised.

c. 461-490 Ireland powerfully evangelized by Patrick, where thousands were converted, baptised, and set free from the power of heathenism.

c. 563 Columba travelled to Scotland with twelve companions, evangelised Scotland, saw many miracles and founded several churches in the Hebrides.

c. 590 Columban and others preached the gospel in France, Switzerland and northern Italy, giving the monastic movement considerable growth and renewal.

601 Gregory the Great, bishop of Rome, found it necessary to write to Augustine of Canterbury exhorting him not to be puffed up with pride that great miracles were taking place during the course of his missionary endeavors in Britain. This is a good indication that revival had taken place during the course of his ministry. In his ‘Confessions he claimed a special dispensation of the Spirit which enabled him to convert the heathen, escape perils, and do ‘signs and wonders’

c. 634 Lindisfarne, Northumbria, base for evangelization of northern England through Aidan, Cuthbert, Chad.

716 Boniface (Apostle of the Germans) and Willibrord preached the Gospel with power and signs following among the Frisians and various Germanic tribes.

1208 Francis of Assisi’s preaching of the Gospel with occasional signs and wonders produced repentance and spiritual awakening for great numbers.

1231 Padua, Antony of Padua attracted 30,000 by his revivalistic preaching resulting in massive numbers of people repenting.

1150 onwards Italy and Europe, Peter Waldo and the Poor Men of Lyons. The Waldensian movement spread rapidly through much of Catholic Europe with profound effects.

14th century Prague, a reform movement began through the preaching of an Augustinian canon from Vienna, Conrad of Waldhausen, then a Moravian Jan Milic of Kromeriz and then by a Bohemian preacher Matthew of Janov.

c. 1398 Jan Hus, influenced by Wycliffe’s writings, began a movement of reform which became a predecessor of the Reformation, along with Jerome of Prague and others. Hus attracted thousands by his revivalistic preaching.

1368 onwards, Vincent Ferrer, Valencian Dominican preacher, travelled widely in Spain, Northern Italy, Switzerland and France, preaching to enormous crowds winning thousands of Jews and Muslims to faith in Christ. Signs and wonders attended his preaching and many miracles were attributed to him.

1525-6 William Tyndale, an early English Reformer, first published his (incomplete) translation of the Bible into English in 1525, influenced by Erasmus of Rotterdam’s Greek Scriptures published in 1516 and Martin Luther’s, published in 1522. The first complete edition of Tyndale’s New Testament was published in 1526.

1517 The Protestant Reformation began when Martin Luther’s published his “95 Theses.”

1519 The Swiss Reformation began with the sermons of Ulrich Zwingli

1524-1555 Hugh Latimer. Early English Reformer. At times, Latimer preached in the open-air to 6,000 people at a time. An entry in the records of St Margaret’s Church, Westminster, where one shilling and sixpence was expended ‘for mending diverse pews that were broken when Doctor Latimer did preach’, presumably as a result of the great numbers crowding into the building to hear this great Reformer.

1541 John Calvin, a French Protestant who had spent the previous decade in exile writing his “Institutes of the Christian Religion,” was invited to settle in Geneva and put his Reformed doctrine into practice.

Puritans experienced many local revivals, and Packer believes the whole Puritan movement should be considered as a revival movement.

1627 at Edinburgh and Inverness, revival under Robert Bruce of Kinnaird

1620s Ulster in Northern Ireland, saw a number of revivals under the preaching of Robert Blair, Josias Welch, John Livingstone, and others who moved from Scotland; and also that of John Ridge, an English minister.

1630 June 21, under the preaching of John Livingstone at Kirk of Shotts, Scotland

1626 in Oldstone, near the town of Antrim, the first revival in Ulster through the preaching of James Glendinning.

1570-1590 Dry Drayton, near Cambridge, England, awakening under the ministry of Richard Greenham.

1630, June 21 John Livingstone led a revival at the kirk of Shotts, a few miles west of Edinburgh, Lanarkshire.

1642 Ireland  A revival among Scottish soldiers, marked the beginning of the Presbyterian church in Ireland.

1647 George Fox began his ministry which included powerful preaching in England, Ireland, Wales, in Continental Europe and in America, accompanied by many reported miracles of healing. He organised the  Society of Friends, or ‘Quakers’ and brought large numbers into his societies.

1665 London, at the time of the Great Plague there was an awakening in the city, particularly through the preaching of a number of the Puritan ministers who had been ejected from their pulpits in 1662.

1660-1691 Kidderminster, Worcestershire, Richard Baxter saw a prolonged awakening over several years which resulted in the vast majority of the town coming to saving faith.

The material on this section was initially based on two scholarly works:
R. E. Davies' ‘I Will Pour Out My Spirit: A History And Theology Of Revivals And Evangelical Awakenings,’ Chapter 4.
Richard M. Riss' introduction to his ‘A Survey of 20th-Century Revival Movements In North America.’ Some additional references have been found in Gillies' 'Historical Collections relating to the Success of the Gospel, 2 vols.' Glasgow, 1754 and other revival histories.