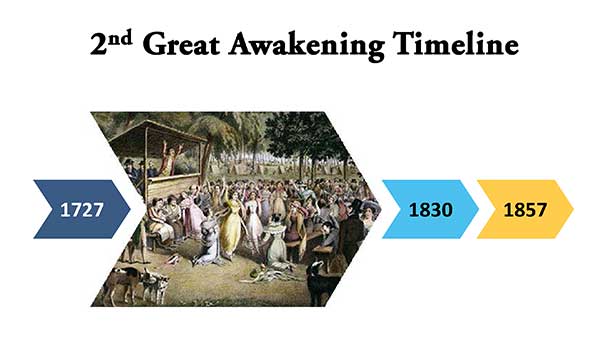 1757 College Revival at Yale led by Naphtali Dagget and saw a small awakening.

1783 Another wave of revival at Yale, also Princeton, Williams, Hampden-Sydney

1795 Timothy Dwight, grandson of Jonathan Edwards, took over Yale College in 1795 and saw over half the students converted in just one year. Other colleges enjoyed similar movements of the Spirit.

1802 Another move of the Spirit at Yale under Timothy Dwight. About a third of the 230 students in the college became Christians.

1802 The revival spread to Dartmouth and Princeton. Almost 80 of the 105 students at Princeton were saved and 25 of them became ministers.

1808 Revival again came to Yale when 30 were converted

1812-1813 About 180 students at Princeton were touched during a student prayer revival.

1831 Revivals again occurred at Yale, where Horace Bushnell was converted.

1841 Further revivals at Yale with 75 converts under the preaching of Jacob Knapp.

1784 John Erskine of Edinburgh re-published Jonathan Edward's earnest plea for revival prayer. It was entitled, 'An Humble Attempt to Promote Explicit Agreement and Visible Union of God's People in Extraordinary Prayer for the Revival of Religion and the Advancement of Christ's Kingdom". Denomination after denomination devoted a monthly Monday evening to prayer, first in Britain, then in the US.

1791 Revival beginnings in the industrial towns of Yorkshire in late, spreading across the UK and various denominations. Methodists alone grew from around 72,000 at Wesleys death in 1791 to almost a quarter of a million within a generation.

1807 May 31, the Mow Cop Revival, 2-4000 attended, prompted by Lorenzo Dow UK visit, led by Hugh Bourne and attended by William Clowes who subsequently became a revivalist preacher. This meeting was the beginning of the Primitive Methodist movement in UK.

1800 Scandinavia was impacted and in Switzerland a visit of Robert Haldane sparked off revivals among the Reformed churches.

1773 Virginia: revival breaks out as first instance of a Pentecostal-type religious revival in North America; followed by recurrence in 1787.

1794-1798 In US the concept of prayer was very widespread and awakening broke out everywhere. Every state and every evangelical denomination was affected.

1771 Francis Asbury, later known as the “Wesley of America” sailed across the Atlantic for America with other Methodist circuit-riding preachers. Great advance followed.

1784 Wesley ordained Thomas Coke and others for work in America.

1797 An awakening under Charles Backus began in Somers, Connecticut, with the young people.

1800 James McGready and Barton Stone witnessed an astounding revival at Kentucky with much trembling, shaking, tears, shouting and fainting.

1801 Barton Stone was invited to minister at the Cambridge meeting house in Bourbon County. A second visit attracted 20,000 people to a 6-day camp-meeting, which witnessed astounding revival scenes, with hundreds falling at once, with shrieks and shouts and many conversions.

1805 Lorenzo Dow preached in the Court-house at Knoxville, Tennessee, when about one hundred and fifty of his hearers were exercised with “the jerks.”

1805-6  Revival broke out in central Pennsylvania through the ministry of Jacob Albright and George Miller, two Evangelical pastors.

1809 February, Park Street Church in Boston was founded and became a center of missionary activity and renewal in Unitarian Boston. Most revivals occurred in the period from 1813 to 1846. One was under Sereno Dwight in 1826 and 1827.

1812 First missionaries sent to India, later to China, Hawaii and southeast Asia, establishing hospitals and schools at its mission stations, translation of the Bible into native languages. Thousands of missionaries were sent to Asia.

1815 Revival at Princeton during which Daniel Baker visited the rooms of every student and won forty-five to Christ. More than twenty-five of these later became ministers.

This timeline was initially constructed using Earle E. Cairns historical chronology, with additions drawn from a variety of other revival works.