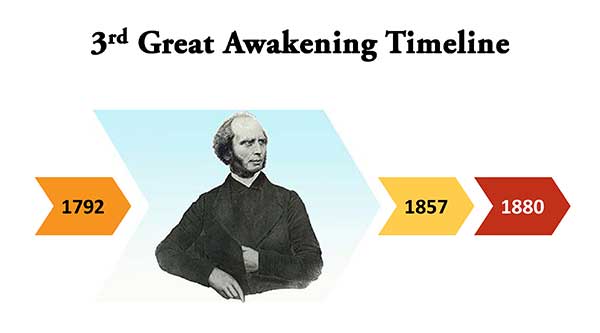 Considered by some to be an extension of the 2nd Great Awakening or a 'resurgence,' as J. Edwin Orr described it, we have decided to view it as a seperate international revival because of the massive effect of Charles Finney's ministry. The greatest effect of this revival was felt far beyond the boarders of North America and for centuries to come. Finney's philosophy of revival, expressed in his autobiography and explained in his "Revivals of Religion", has subsequently affected thousands of Christians and precipitated revivals around the world.

1830 Daniel Baker in Savannah, Georgia, a hundred people joined the church during a revival.

1828 Revivals in Virginia, particularly effective in Williamsburg and Norfolk.


1824 Revival at Windsor, North Carolina, the town was ‘entirely reformed’ by a movement in which four physicians and the high sheriff were among the four hundred and ten baptized and received into church membership.

1824 Charles Finney met with a significant response as he preached in small towns in western New York State.

1824 Finney he made the acquaintance of Daniel Nash (Father Nash). Nash's special ministry of prayer was probably a factor in the increasing success of Finney's ministry.

1825-1826 Finney preached in larger communities such as Rome and Utica in Oneida County, New York State, with far greater success.

1830-31 Finney’s ministry in Rochester has been called the greatest year of spiritual awakening in American history. Shops and markets closed; local taverns went out of business as people from every walk of life attended the meetings.

1830’s The Methodist Episcopal church steadily increased especially through camp-meetings. But their numbers doubled in 1840-1842. Other denominations flourished too.

1831-1837 Baker held fifty meetings in Georgia, Texas, Florida, and South Carolina. About twenty-five hundred were saved in these meetings.

1835 Finney published Lectures on Revivals of Religion while Professor of Theology, at Oberlin College

1876 Finney published his Memoirs  - a book that, with his lectures, has done more to prompt prayer for revival then any other books in history!

1832 Edward Irving, who strongly believed in the restoration of spiritual gifts and apostolic ministries to the church, began the Catholic Apostolic Church after pastoring the National Scotch Church of Regent Square, London.

1839 July, The American, James Caughey experienced a personal and powerful baptism of the Holy Spirit.

1841-1847 James Caughey was led to minister in England, mainly among the midlands and north among the Methodists. During this time he earned the title ‘King of Revivalist Preachers.’ It was during this time, when preaching at Nottingham, that William Booth was converted under Caughey’s preaching. He recorded over 20,000 converts during this time.

1830’s There were local revivals in various parts of the world, particularly in Scandinavia, central Europe, South Africa, the Pacific Islands, India, Malabar, and Ceylon.

1837-1839 Titus Coan saw astounding revival in Hawaii as a missionary. In one day Coan saw 1,705 proven converts at Hilo.

1838-1852 Johann Christoph Blumhardt. Beginning during his ministry tenure at Möttlingen, Germany, Blumhardt developed a healing ministry which catapulted him to fame.

1843  December 28 With others present, Blumhardt was praying with Gottlieben when her sister, Katharina, began to act strangely, became threatening and roared superhumanly. He realised it was demonic and began to pray. Suddenly, she loudly shrieked, “Jesus ist Sieger!” (Jesus is victor!) and fell silent. Both women experienced immediate freedom. This triggered an inbreaking of kingdom power that transformed the entire village of Möttlingen and attracted people from miles around.’ The entire village experienced a spontaneous revival. It led to revival, healing and miracles. Andrew Murray and his brother John went to meet him and "saw first-hand the work of God’s power." (Orr)

1844-1852 People came to Blumhardt one by one. As Karl Barth says, “unbidden, but irresistably, people came to him to confess what they had to confess, and he for his part saw himself compelled, unsought, unasked, governed by no preconceived theory, to absolve them in the name of God with a quite unpietistic objectivity.”

1844 Revival in Sweden under Lars Levi Laestadius, a Swedish pastor in Lapland. He met his wife who belonged to a revival movement marked by pietistic and Moravian influences and led by pastor Pehr Brandell of the parish of Nora in the municipality of Kramfors in Ångermanland. She told Laestadius about her experiences on her journey to living faith and he immediately embraced the truth and practice of this faith himself. His preaching produced an awakening in others. He moved to Pajala in 1849 and Laestadianism, the religious revival named after him, became a widespread movement, spreading to Finland and Norway.

1852 Blumhardt and his wife moved to Bad Boll, in the district of Göppingen in Baden-Württemberg, Germany where thousands flocked to find spiritual restoration and renewal.