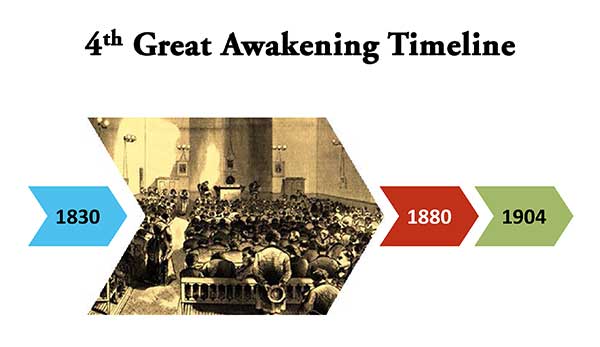 1857 October, Revival at Hamilton, Ontario, Canada, Wesleyan Churches. Walter and Phoebe Palmer saw 'Revival Extraordinary, 'according to a local newspaper, with three or four hundred converts who had made a public profession of faith.

1857 fall, Walter and Phoebe Palmer reported converts by the hundreds in camp meetings in Ontario and Quebec with the attendances ranging from 5000 to 6000 during the 'Indian summer.'

1857 October 14, the twenty-first day after the first meeting—the stock market crashed. By March of 1858, every church and public hall in downtown New York prayed daily. Within six months over 10,000 business men were meeting in around 150 similar meetings across America; confessing sins, being converted and praying for revival.

1857-8 Almost all colleges and universities, from New England to the western frontier, from Virginia to the heart of Texas were awakened. At Amherst the whole college was affected, only three or four seniors still remained unconverted.

1858 Humphrey Rowland Jones from Wales, spread sparks of revival in US Methodist churches.

1859 A. B. Earle, who ministered acceptably among various denominations united in city-wide efforts, including preaching eighty times in a Boston campaign.

1857-1859 England and Scotland were blessed with the ministry of a number of remarkable evangelists. Included among them were, Reginald Radcliffe, Brownlow North, Richard Weaver, Robert Aitken, William Haslam, H. M. Grant, and Duncan Matheson.

1859 This movement, which originated in a prayer meeting of four young men in the village schoolhouse of Kells, in the parish of Connor, Antrim, made a greater spiritual impact on Ireland than anything else known since the days of Saint Patrick. Over 100,000 were converted that year.

1859 14th March, James McQuilkin and his prayer labourers held a meeting for revival in the First Presbyterian Church in Ahoghill, County Antrim, Ulster with three thousand people outside in the rain. Moved by a layman’s message, hundreds fell on their knees in the muddy street. For six months the awakening continued with many social, moral and religious improvements.

1859 May, Berry Street Presbyterian Church, Belfast was awakened through a visit of some of the ‘converts from Conner (near Ahoghill).’

1859 June, most evangelical churches remained open and overcrowded for weekday services. An estimated that ten thousand people were converted in the weeks that followed.

1859 David Morgan visited the counties, towns and villages preaching in the power of the Holy Spirit, and a mighty harvest of souls resulted.

1858 In the autumn, a united prayer meeting was begun in the County Buildings, Aberdeen.

1958 November, Reginald Radcliffe, an English evangelist, came to Aberdeen and led a five-month revival with earnest prayer and biblical preaching. Edward P. Hammond had meetings, especially with children, in Annan. The revival spread all over northern Scotland. A revival in Glasgow led to awakening all over southern Scotland through daily prayer meetings.

1859 David Morgan saw more than half the population of 800 in Pontrhydfendigaid, join the Calvinistic Methodists. At nearby Tregaron eighty seven people were converted a the service. By mid-summer the whole country of Cardigan had been pervaded with the most fervid religious feeling, Calvinistic Methodist converts alone numbering 9,000 in June, 15,000 in August, out of a population of 70,000.

1859 August, most of the churches in the southern counties of Wales were crowded on Sundays and weekdays. 110,000 were added to the church.

1860 After a week of prayer in January, a second wave of revival swept Wales, with even greater strength in some places.

1862 Dr. and Mrs. Walter Palmer, experienced stirring times in Cardiff. For thirty days 'a remarkable work of the Spirit’ was acknowledged and felt throughout the town, affecting public morals, bringing hundreds to prayer meetings.

1862 Richard Weaver filled the largest building in South Wales, the Music Hall, with 4000 people and ‘half the people could not get in.’

1863 William and Catherine Booth, fresh from a revival of great power in Cornwall, began preaching in Cardiff, and won 500 people to the faith. It became necessary to use a large circus building accommodating 2000 to 3000 people.

1859-61 In East Anglia, UK, local awakenings began after union prayer meetings for revival resulted in the quickening of believers, followed by the conversion of outsiders. By 1861 the evangelistic phase of the Revival was in full swing.

1859 Dr. and Mrs. Walter C. Palmer visited Newcastle-on-Tyne, in Northumberland, which become the scene of a religious Awakening, with 1400 confirmed converts by the end of the year.

1859 William Booth experienced a time of revival when he pastored a New Connexion (Methodist) Church.

1859 Christmas Eve, Charles Finney arrived in Bolton with Mrs. Finney, and became the spearhead of a revival movement among the Congregationalists and Methodists. Three months later, more than 1200 were attending the weeknight services, and hundreds were being turned away on Sundays.

1860 The Palmers moved on to Gateshead in May, winning 500 plus converts.

1860 William and Catherine Booth conducted a preaching mission in Hartlepool, attracting up to 1000 people and winning 250 converts.

1860 St. Paul’s Cathedral, Westminster Abbey, St. James’s and Exeter Halls in the fashionable West End, were offered services for the middle and upper classes. Orr suggests and aggregate number of 100,000 attendees based on available seating. Tens of thousands more gathered in theatres and churches across Greater London.

1861 Lowestoft. Radcliffe and Henry hired the big railway depot, which seated 3000 of a population of 9000.  Hundreds were converted, reclaimed from profanity and immorality.  An awakening spread throughout the eastern counties, Norfolk, Suffolk, Essex and east and west of the Fens.

1861 Reginald Radcliffe began Sunday evening meetings in the Concert Hall which was overflowing. He saw 'an extraordinary work of the Holy Spirit,’ with converts in the hundreds.

1863 William and Catherine Booth and James Caughey, who had deeply impressive meetings in Bath Street Chapel and the Alhambra Circus seating 3,000.

1863 a religious Revival broke out in the Black Country, an industrialized area to the north of Birmingham, where Dr. and Mrs. Palmer ministered for a month in Walsall, using the midday prayer meetings and evening preaching service technique. 300 people made profession of conversion.

1863 William Booth saw ‘a gracious melting and breaking up of heart’, followed by many conversions.

1860’s Lord Shaftsbury championed for the cause of the young, the poor and the oppressed. Barnardo founded his famous orphanages. David Livingstone and Mary Slessor propagated missionary work in Africa. Such was the impact of this fourth great awakening.

1859 Uppsala, Sweden 1858, Paul Peter Waldenstrflm was converted in 1858 and began preaching. Within three years church pulpits had opened up to him everywhere, becoming the leader of the revival movement.

c.1860 Danish island of Bornholm, far to the east in the Baltic Sea experienced a religious awakening led by P. C. Trandberg, a powerful preacher of repentance and conversion. By 1863, Trandberg had an eager following of a thousand awakened believers.

1865 Vilhelm Beck and Johannes Clausen engaged in a wider ministry of evangelism and revival and enrolled their following in the Church-related Indremission.

1865 The Trandberg revival spread to the city of Copenhagen and through Zealand, Lolland and Jutland.

1860 on, local revivals followed evangelistic conferences organised by the Evangelical Alliance. At Eberfeld, in Germany, a week of prayer brought about an extraordinary revival in the municipal orphanage which provoked reaction and controversy.

c. 1860 Samuel Hebich, under whom a remarkable awakening had occurred on the Malabar coast of India, returned to his native Germany at the time of the mid-century awakening. He preached for nine years in Wurttemberg, Baden, and Switzerland. Hebich, preaching three times a day, in churches and in public bars. His dynamic was revival, and his method was evangelism in its simplest, most straightforward forms.

1860’s Russia, , Lord Radstock, converted in the 1860 Awakening in Britain, was called to a ministry of evangelism among the Russian aristocracy evangelistic message with outstanding success.

1860’s  Radstock was followed by Friedrick Wilhelm Baedeker, a British subject, who evangelized throughout all of the Russian provinces and territories.

1868 The revolution of 1868 brought a measure of religious liberty to Spain, encouraging the growth of a number of Protestant gatherings and the entrance of missionaries from Great Britain, Germany

1859 Jamaica. A remarkable evangelical awakening began in a Moravian church and spread through the chapels of the entire island. Beginning in the south, it moved across the central parishes and then on the north and south coasts, from Spanish Town to Savanna-la-Mar, from Montego Bay to Ann’s Bay.

The original outline for this timeline was taken from J. Edwin Orr’s chronology recorded in ‘The Fervent Prayer.’ We are adding more from further research in other revival literature.