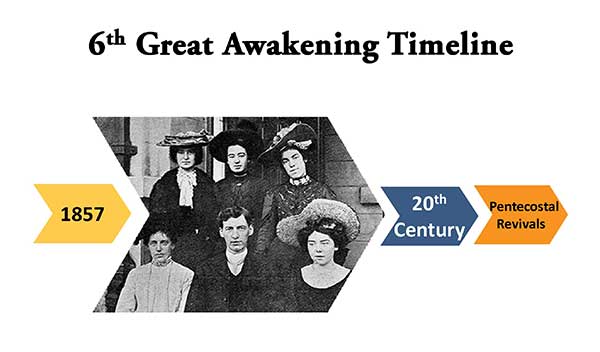 1900: a revival broke out among South African Boer soldiers, who had been captured by the British and transported to various British colonies. At the conclusion of the war, in 1902, they returned to South Africa and the revival returned with them. Gypsy Smith reaped a great harvest there in 1904.

1900: revival in Japan, during the year the church doubled in size as revival swept through many ailing churches.

1902: Torrey and Alexander conducted meetings in Melbourne, Australia, resulting in over 8,000 converts. This news spread like wild fire, igniting a passion for prayer and a fresh expectation for God to work in similar ways everywhere.

1904: Torrey and Alexandra were in Cardiff, Wales and, in the light of a minimal response to the Gospel, they called for a day of prayer and fasting. Suddenly things changed dramatically and thousands were converted during the next 12 months.

1904: Sept 22nd. On the day of prayer and fasting (according to Torrey) Evan Roberts received an anointing of the Holy Spirit with great power, in a meeting conducted by Seth Joshua. Here the Welsh Revival began. It was 1904.

1891: Evan Roberts (1878-1950), converted as a young boy, becomes a communicant member at Moriah Calvinistic Methodist (CM) Church, Loughor (near Swansea), aged 13. He is challenged by an exhortation of Moriah elder William Davies to seek the Holy Spirit and never miss a meeting. Later, Roberts becomes a mineworker, apprentice blacksmith, trainee for the CM ministry, and the key figure in the revival.

1896: 13 Welsh people at the northern Keswick Convention (dedicated to ‘higher life’ holiness teaching) pray for Wales and ask God for a similar convention in Wales.

1898: W. S. Jones, Baptist minister originally from Swansea, receives ‘a baptism of power’ shortly before leaving the USA to minister in Wales. He settles in Penuel, Carmarthen.

1898-1900: Evan Roberts moves to Mountain Ash. He attends a conference in Builth Wells. After hearing him lead publicly in prayer a minister tells Roberts he should pray about becoming a minister.

1900: W. S. Jones has a second ‘baptism of power’ at Penuel, Loughor. He preaches yielding to Christ to obtain holiness. He receives ‘divine healing’ for a medical condition. Evan Roberts, back in Loughor, gathers a young people’s prayer circle.

1902: Deacons at his church ask Evan Roberts to consider entering the ministry.

1903-1904: W. S. Jones asks young ministers to covenant together in prayer for revival in Wales. Signs of blessing occur, for example in a Baptist church in Penydarran and in a regular prayer meeting for young people in Pencoed, joined later by large crowds.

1903 November-1904 January: Jenkins wrestles with God for a blessing and is ‘clothed with power from on high’.

1903: December: Evan Roberts, age 26, prepares for full-time CM ministry. This requires him attending a school in Newcastle Emlyn from September 1904 before doing ministerial training at Trevecca.

1904: Cardiganshire Convention at New Quay – the first of five such Keswick-type conventions in South Cardiganshire during 1904. At this Florrie Evans (young girl in New Quay; later a revival helper) is influenced.

1904 February: After Sunday evening service at New Quay, Florrie Evans asks Jenkins for counsel. He advises her to submit to the lordship of Christ. At the next Sunday morning after-meeting Florrie Evans publicly confesses, ‘I love the Lord Jesus with all my heart’ – the meeting is reduced to tears.

1904 Spring: News of this confession and its result spreads and crowds are attracted to the united prayer meetings. Young people of 16-18 years go from New Quay to churches of the surrounding districts to share the blessing. The Western Mail becomes interested. Florrie Evans becomes known for her visions and prophecies. Evan Roberts at Loughor has an experience resulting in close communion with God, which is repeated daily for three months.

1904 June: Preaching festival at Ponciau near Rhosllanerchrugog. The power of the Holy Spirit is experienced in such a way as to remind older people of the 1859 revival.

1904 August: Rosina Davies conducts special services. One of these was notable for its power; and many carry the fire back to Glamorgan.

1904 August: Second Llandrindod ‘Keswick’ Convention; speakers are F. B. Meyer, A. T. Pierson, Evan Hopkins and Jessie Penn-Lewis. Seth Joshua attends, but has serious misgivings. Many people and ministers ‘fully surrendered to the lordship of Christ and received the baptism with the spirit’.

1904 August: R. A. Torrey holds a mission in Cardiff; many are saved. Torrey preaches the need to be baptised with Spirit to give power for service.

1904 September: Evan Roberts and other young men arrive at the grammar school at Newcastle Emlyn.

1904 Sept 18th-23rd: During the convention at New Quay revival breaks out with powerful outpourings of the Holy Spirit.

1904 Sept 24th: Seth Joshua travels to Newcastle Emlyn where he ministers for a few days before the start of the prearranged Convention at Blaenannerch which had been organized by Joseph Jenkins of Tabernacle Chapel, New Quay, and John Thickens of Aberaeron.

1904 Sept 28th: (Wednesday) Third Keswick in Wales Convention, at Blaenannerch. W. W. Lewis is the speaker. Roberts says he is waiting for the fire to fall. About 15 young people from New Quay give their testimony. The fire fell.

1904 Sept 29th: (Thursday): Seth Joshua travels from Newcastle Emlyn to speak at Blaenannerch convention, along with 20 college students including Evan Roberts. They sing on the way: ‘It is coming, it is coming – the power of the Holy Ghost – I receive it’! W. W. Lewis speaks at a 7.00 a.m meeting and in the 9.00 a.m. meeting, led by Seth Joshua, the fire fell on him and he prays, ‘bend me – bend us’. Evan Roberts caught the words and prayed, 'Bend me, O Lord.'

1904 Sept 30th: Roberts draws up a list of young people to visit the towns and villages of every county, including Robert’s friend Sidney Evans and girls from New Quay.meeting Many cry out for mercy. Here Evan Roberts caught the fire and prayed, 'Bend me, O Lord.'

1904 October: Roberts has a vision of 100,000 about to be converted in Wales. The vision is shared with other young people. Evan Roberts and others hold meetings in Blaenannerch, New Quay and Pembroke-shire. Rosina Davies sings hymns in a service to which the congregation respond with two hours of weeping and worship.

1904 Sunday 30 October: In the morning service at Newcastle Emlyn, Evan Roberts is heard to say, ‘this place is full of the Holy Spirit – I can feel him blowing’. Roberts, having had a vision of his Sunday school room in Loughor, returns to Loughor.

1904-1906: The revival spreads throughout Wales and into parts of England as well as other countries.

The above1904 revival – a timeline section is largely based on an edited document from a study by John Hayward. Full notes and references at https://churchmodel.org.uk

The impact of the Welsh Revival touched essentially every aspect of Welsh society, with 100,000 people throughout Wales professing faith within 6-9 months.

The spread of Revival outside Wales

1905: Wherever the news went it seemed to cause fervent prayer and ignited revival fires across the world. In Great Britain church membership increased throughout the land.


1905: Many powerfully used Christians were converted during the Welsh revival: Rees Howells, Intercessor and Founder of the Bible College of Wales. W.O. Hutchinson of Bournemouth, founded the Apostolic Faith Church, which was the first Pentecostal movement to be established in Britain. Donald Gee was converted during Seth Joshua’s visit to Finsbury Park Congregational Church. George and Stephen Jeffreys, two Welsh brothers were converted in the revival.

1906: The Azusa Street revival, Los Angeles was the most powerful and influential revival that was spurred on by the Welsh revival. Frank Bartleman was in direct contact with Evan Roberts. W. J. Seymour led the revival in Azusa Street, which lasted from 1906 to 1909; thousands of seekers travelled from Europe to seek their personal Pentecost.

1906: T. B. Barratt, a Cornishman who later became a nationalized Norwegian knew of the Welsh revival. He went to America on a fund-raising trip and was baptised in the Holy Spirit on October 7, 1906, after reading about the revival in Azusa Street. He returned to in Christiana (now Oslo), Norway with fresh Pentecostal power. Soon crowds exceeding 1000 people flocked to public meetings at his newly formed "Filadelfia" assembly in Oslo. Thereafter the Revival spread all over Northern Europe as far as Finland.

1907 September: First Pentecostal revival in England, at parish in Sunderland under clergyman A. A Boddy. He heard of the Welsh Revival of 1904 and made a special journey to Wales to meet Evan Roberts and see things first-hand. A year or two later he heard of a new Revival in Norway, led by T. B. Barratt. He visited Barratts church in Christiana and wrote ‘My four days in Christiana can never be forgotten. I stood with Evan Roberts in Tonypandy, but have never witnessed such scenes as those in Norway.’ Barratt visited Sunderland and the Holy Spirit was outpoured there.


Smith Wigglesworth received the Holy Spirit there and travelled the world with his ministry of healing and evangelism. George Jeffreys also received the Spirit at Sunderland and later pioneered the Elim Pentecostal Church which planted hundreds of churches in Great Britain over the next few years.

1907: Massive revival in Korea beginning in Pyongyang; Protestants grow by 1914 to 196,389; phenomenal growth of churches. In 1906-1907, sparked by news from Wales and Los Angeles, Christian leaders in Korea redoubled and intensified their prayer efforts, resulting in an unexpected and widespread revival, spreading also into Manchuria and China

In addition to the major revivals listed above, almost no country in the world was excluded from the effects of this incredible revival. Almost every nation, on each continent, received new power from heaven, a new passion for prayer and for the lost. Hundreds of thousands came to the Lord.

For a comprehensive list of these revivals see J. Edwin Orr’s ‘The Flaming Tongue'